When I was in college I worked at Victoria’s Secret and for a very brief time they carried a line of lingerie by the name of La Perla as a test market in Scottsdale Fashion Square Store.  An amazing lady who worked PR for Victoria’s Secret  by the name of Monica Mitro came out to the store to tell us about this special product line and my very good friend and store manager Tamara Boyazis pushed for me to meet her.  Tamara knew I loved lingerie, marketing and was trying to keep me in the Victoria’s Secret family.  As an impressionable college student I was in awe of Monica’s talent, energy and passion for what she did.  I think I embarrassingly told her I wanted to be her when I grew up. (Yikes!-we all have those moments, right? My moments were always around “fashion” and not so much “famous people,” I’d met famous people and not been fazed, fashion people?  Out of my mind.) One of the reasons I was given the unique opportunity to meet Monica, someone so high up the VC food chain, as just as sales associate was I had created a sales incentive game called “Panty Land” yes similar to Candy Land that motivated employees and increased the store’s sales 60% in satin and silk panties in one month and maintained those numbers through the slow Arizona summer months. I’d never seen anything like the La Perla items and made it my mission to own at least one piece.  I waited, and waited, and waited for each piece of the exquisite lingerie to get red-lined (marked down sometimes below the actual purchase cost to the company). The average cost for a bra in the mid 90’s was over $150, the bodysuits $200 and panties around $75.  The sizes were weird and not American, the items were sized 1,2,3, 4 for both bras, panties and bodysuits.

I’m not proud but I purchased over $6,000 worth of La Perla lingerie actually for just over $550 (since it was red-lined), and I was super small the 1’s were big on me and lucky for me all that’s all that was left from expensive line.  (And I don’t say that in a “oh aren’t you jealous because I was so tiny that even the smallest size was big on me” kind of way). I wasn’t even a 32 around and looked like I had a nipple on a board.  Sexy? No but La Perla helped me feel that way.

That was still a lot of coin for a kid in college back in 1994.  I didn’t care if it seemed unreasonable or that I actually purchased a three tiered wood fixture from Victoria’s Secret along with the hangers so I could display this artwork.  Everyone referred to it as “the bra tree.”  You’d think men would have been more excited to see a 6 foot tree filled with lingerie tucked into the corner of my bedroom (that thing followed me through 6 moves) but no women actually appreciated the beauty of the pieces more then men. 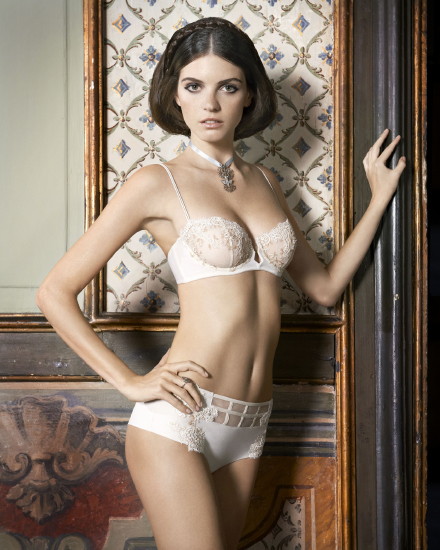 When I moved on after college and made it in the lucrative world of startup medical device sales my love of La Perla never waned. In fact I  purchased  an exquesite set for each of my girlfriends as they got married. (One of the husbands still thanks me every time we see each other around twice a year).  I beg each woman reading this story to please treat yourself at least once to something that makes you feel amazing, priceless and beautiful.  It may not be lingerie for you (or it might be you, you could even surprise yourself).  Also, I have always believed in buying quality over quantity and these items have stood the test of time.

Recently windows shoppers walking past the La Perla New York City lingerie store were a bit shocked to see that one dummy was so thin, its fake ribs were showing through its fake skin. The store has since pulled the mannequin and apologized.  I recognize that we have body images as women and don’t want things like this to contribute but Jezebel reports that the outrage spread on Twitter soon after people started seeing the mannequin on display at La Perla, a frenzy erupted.

“How does #LaPerla think ribs on a mannequin is ok?!” one Twitter user wrote, posting a photo of the mannequin in question.

Maybe it’s misguided nostalgia on my part or maybe it’s the overraction to fake ribs and fake skin that created Forced Accountability that caused La Perla to react swiftly; and, there are real women (and men) badly damaged by the implantation of medical mesh that can’t get this type of attention on twitter or Forced Accountability from Johnson & Johnson and the other makers of mesh.  It does go to show that the power of the people have impact and can create positive change.