UPDATE 4.29.2014  Allergan will not go quietly. The pharmaceutical company says that it has contacted Sanofi and Johnson & Johnson to see if either company would like to buy it, says Bloomberg.  Ackman’s fund bought almost 10% of Allergan, and analysts are missing the point he’s trying to drive up the asking prices.  So our crystal ball is shaking out.  Johnson & Johnson officially in the mix, something called here weeks ago.

Valeant’s ‘unsolicited’ offer to purchase Allergan for $47 Billion was a valiant effort but analysts say it’s undervalued. (Duh!)  But what it does is expose the fact that Allergan’s open to being purchased and potentially drives up the asking price and brings more suitors to the table.  The more companies aware that Allergan is on the block is great for them but bad for those who may had hoped to scoop up the company unnoticed and in a veil of secrecy as these deals are often done.

Allergan fits in the Johnson & Johnson portfolio since the company, as of last week and without explanation, abandoned PurTox (the non FDA approved competitor to Botox) and Botox has the indication for overactive bladder (something Johnson & Johnson’s Ethicon’s Gynecare has negatively been in the news for lately where they were found to have destroyed documents set to be used in the upcoming mesh trials.  Two cases so far have gone to trial with many more set in the near future)

And is Ackman an evil genius who purchased 4.99% of Allergan stock over several weeks in anticipation of a bidding war where Valeant was never the intended buyer but used as a pawn?   Again, time will tell.

Here’s the 65 slide presentation between Valeant and Allergan April 22, 2014 (shows how quickly this was pulled together-almost like trying to beat another company to the punch).  If you are a business student or intrested in business strategy, this slide deck is worth a look.    And they clearly haven’t read my rules for a great slide presentation. 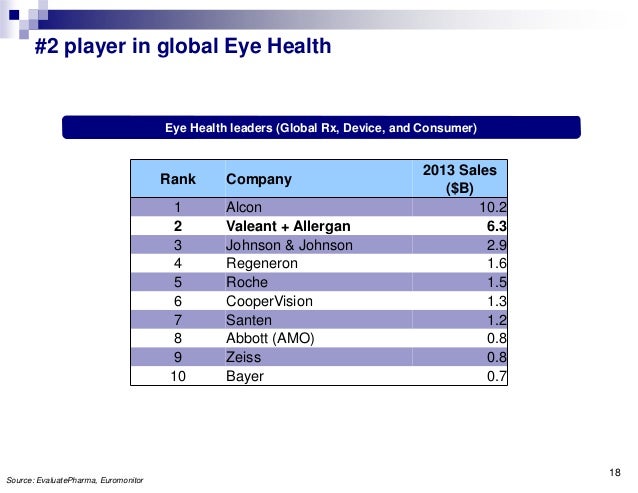 Hey look at who’s #3 in the eye market?  Is this more evidence to support the theory that Johnson & Johnson’s ditching of PurTox was strategic?

Not to mention they compete in these markets as well.